How to Heal Your Heart after a Miscarriage 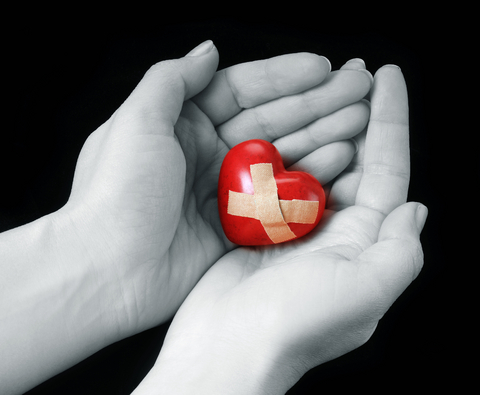 “It’s hard to know how many parents lose children to stillbirth and miscarriage, and that loss is just as great as losing a child by any other way. It’s tragic and contrary to our dreams and expectations of having a happy, healthy family,” said Jessica Steffens, Mercy HeartPrints coordinator

I sometimes write about this very hard subject, not to depress people, but in hopes to open their minds and hearts to heal, or help someone else heal through their journey when dealing with a miscarriage. Not many people talk about it. But it’s no fun dealing with this on one’s own.

The day I lost Joshua to a late miscarriage, my parents, friends and fiancé were all there for me. They hovered around saying, “Oh my God Deb, I’m so sorry.” I was offered condolence, hugs and “I don’t know what to say” looks. I was in shock and completely stunned at the news. One day he was there and the next…gone.

Within 2 days after my miscarriage, everyone around me went on with their lives and I was left to mourn alone. Neither my parents nor my fiancé desired to listen to me or talk about the tragedy after the first day. I was confused, alone and devastated. I convinced myself, because everyone else was “ignoring this”, that I was strange or crazy to still be in pain. I tried hard to stuff down the feelings and I succeeded – with big consequences.

I used my logic mind and did what I needed to do to move on with my life. Because my fiancé ignored my calls and texts after the miscarriage, I broke with him. He, feeling free from the burden of our relationship, started to feel closer to me. Though he still would not talk about losing our son, he became more affectionate, giving and loving for a few weeks. I began to wonder if we would reconcile, but then, with no warning what so ever, he disappeared.  I lost my son Joshua, my fiancé and his daughter all in less than one month.

In the first couple of years, I would have massive panic attacks in the weeks leading up to the anniversary of the day I found out he had gone. I didn’t even know why I was getting sick, until the date grew closer and I consciously remembered. My body was trying to process the shock and pain that I had never allowed it to feel.

Near the fourth anniversary of losing Joshua, I actually went to the ER as I thought I was having a heart attack. I didn't have a heart attach, the pain was from stress and inflammation around my heart. Along with an anti-inflammatory; I was prescribed anti-depressants (including Xanax). I threw away the anti-depressant prescription. In my gut, I knew what I needed to do to begin healing. I needed to FEEL it.

Last week marked the 6 year anniversary of losing my baby boy to a late miscarriage. My natural protective defense when I’m hurt is to use my MIND to push the pain away. Sometimes that means denying how I’m feeling and other times that means dropping into logical mode. My logical brain says, “Why does this still bother you? It’s been six whole years! You didn’t get to ‘meet’ him. Just think of all of those people who have lost live children!”  In other words, my logical mind badgers me for not “just getting over it” and forgetting about Joshua. My mind still tries to bully me, but I found a way to surpass those negative comments coming from within.

Last year, near the anniversary, I promptly told this logical brain that it needs to step aside so that my soul can weep because I miss my little guy so deeply. I will feel this way until I see him again and accepting that fact has been the only thing that makes losing him bearable.  Feeling is the only thing that has aided in my healing thus far.

This isn’t easy. It caused some pretty big rifts in my romantic relationship last year. I know I had every right to feel and go through what I did, but dealing with a mix of anger (sometimes lashing out) I am sure I was unbearable and more than likely my guy took it personally. But, I can tell you that this year was a BREEZE compared to the last five years. I’m convinced that it’s because I FINALLY allowed myself to “go off the deep end” and feel this pain. The “deep end” turned out to be a lot easier to tread in than I thought.

If the feelings you feel are disrupting your life for long periods of time, I would totally suggest finding a GREAT therapist or support group!  I’ve always said that each of us should have been assigned a therapist at birth. Life can be hard to navigate!  My local hospital has a GREAT program for those who have lost a child due to miscarriage. Don’t hesitate to reach out to your local hospital and ask what programs or support they offer.

No matter what people say (or don’t say) when you’re upset about your miscarriage, you deserve to feel whatever you’re feeling. If you were able to be fully accepting right off the bat, GREAT! Don’t allow anyone to discourage that acceptance.

If you’re still feeling down at times over your miscarriage, then feel down! Take a long bath, meditate, pray, sit quietly but just feel. Don’t distract yourself or deny your feelings it will only mean that they will emerge later – and usually at the most inopportune time!

You and your baby are worth the time it takes to have a great cry, an amazing hug (even if you hug yourself – no kidding) and to take the time to love and miss each other. My feeling is that we will be reunited with our babies when we go “Home” and this reunion will be one of the sweetest moments we can imagine.

As my two daughters, the lights of my life, have grown, they have expressed often how they still include Joshua in their sibling circle. They are both so intuitive and have the biggest hearts you can imagine. Being open about my feelings has allowed them to process their own feelings. Getting ready with me to bring him into the world and then being told that won’t happen, had to have been confusing. Another amazing reason to feel and share those feelings with those you love.

Tina, I'm so sorry for your and your husband's loss.

I adore that you had such support! Good for both of you for leaning on one another.

Deb, I have to agree this is a painful experience that is very hard to take. People don't want to talk about it and can't seem to understand the pain you're feeling.

No matter what point a miscarriage happens, it is a devastating loss. I, luckily had a husband that shared my pain. He was much better at making me face the pain than shove it aside.

Still, that awful day is remembered and I look forward to the day I can see the child I lost.