Stop Blaming Others for Your Divorce

“You and your piss poor advice led my marriage to a divorce can't wait to meet you in person and let you know it !!!! looking forward to meeting you face to face!!” I copied and pasted this straight from a nasty email I received a couple of days ago. It’s the not the most elegant “blame storm” I’ve endured, but I give him an “A” for succinctness. Obviously I would never advise someone to get a divorce, only to follow their deepest needs and desires, but that’s not what this post if about. It’s about how so many of us blame others for our divorce. 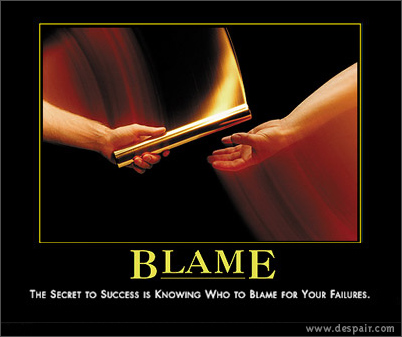 YOU’RE RESPONSIBLE FOR MY ACTIONS!

Even though events such as this are rare, giving advice for a living has its down side. Blame is the biggest of those less savory feelings. I not only understand where he’s coming from, I’ve felt that way before. Instead of looking at my own actions, I have been angry with others and blamed them for my “bad fortune”. Damn you Netflix! Why are your shows so enticing! It’s not my fault that I binge watch “Orange is the New Black” and don’t get a thing done! When I realized that blaming others will always keep me in a state of victimhood, I knew it was time that did a blame game overhaul.

IT’S TOO PAINFUL TO THINK I MAY BE PARTLY RESPONSIBLE

When I got divorced, I blamed him. I told myself and others that it was his fault and I’d proceed to list a 1000 reasons why. This story that I told myself became a “reality” that I accepted. The truth that lurked underneath was too hard for me to bring into the light for a long long time. You see, like my buddy that blames me for his failed marriage, I too didn’t want to think that I had a damn thing to do with my mine.

The poor dude has no clue that if he continues to blame others for his divorce that he’ll turn around and have the same experience in another relationship. Or the blame will fester within him and he’ll never allow anyone else to get close to him again. The truth will always try to surface.

The lie we tell ourselves, such as, “She broke us up!” causes anxiety because we feel, somewhere deep, that it’s a lie. So we continue to find evidence to support our lie and this causes more and more anger. On some level we know that we are 100% responsible for our lives. When we can own that fact our happiness and relationships get healthier and better. The lie will stop pushing down the truth.

TAKE RESPONSIBILITY FOR YOUR ACTIONS

It’s not easy to look into the mirror and say, “Yes, I made choices that affected my life and I’m unhappy with them!” It’s not comfortable to be blamed by your, soon to be, ex-spouse and yet try to NOT to blame him or anyone else for what’s happening. You knew who you were marrying. Obviously that’s not always 100% true, but most often it is.

If you take a moment and think about all the red flags that were there in the beginning you’ll see that you chose to ignore them because you were head over heels in love, or lust, and didn’t wish to see them. Or maybe you both changed and drifted apart. That happens and it’s not just a one sided responsibility to keep the marriage alive.  Or one of worst things, maybe he cheated, or she became a different person. All of these factors are super hard, no doubt, but blaming isn’t going to help. Feeling the hurt and anger over someone’s bad behavior and making a choice based on those feelings is healthy and will get you much further than blaming!

Newsflash! No one wants to hear your constant blaming. There isn’t one person in the world that listens to months and years of blaming and still thinks you’re right. It’s negative. Just stop it. If you’re still hurt over your divorce, please speak in “feeling” terms, such as “I feel so sad, it would have been my wedding anniversary today.” Rather than stalking the ex on Facebook and showing the pics to your friend, “Look at that bastard and his trollop! He’s so evil. He would never take me on that trip to Italy! Why does SHE get to enjoy it with him?”

TIME TO MOVE ON

You cannot move on when you’re blaming others. I think this is one of the worst feelings I endured and I watch others go through. You know that friend who has been divorced for 12 years but she still hates him (and the tart he married) and prattles on about it, endlessly, still to this day. Let’s all take a deep breath and look at ourselves, have a good ugly cry, a long bath and move along. Moving along does not mean to stop feeling. Feeling is the key to healing your life! But, blaming others for your divorce (including your ex) is not feeling. It’s thinking and again, it’s a lie.

I shared this email with a friend of mine. I LOVE her response; I give her an A++ both for eloquence and succinctness.